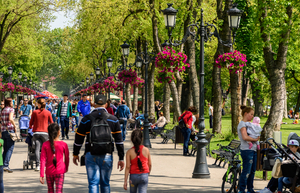 The City of Tuscola Tourism Committee met on Tuesday, March 15.

"The Tuscola Tourism Committee is a committee formed by the City Council to oversee the activities and budget of the tourism department of the City of Tuscola. The tourism department is funded by a local tax on hotel and motel operators. Those tax dollars are spent exclusively for the promotion of tourism and conventions within the city, and for comprehensive marketing plans and strategies for the city."

Here are the meeting minutes as provided by the City of Tuscola Tourism Committee:

The meeting was called to order approximately 8.30 am. In attendance: Donna Kidwell, Allen Schwass, Alta Long, and Anna Nelson.

Approval of bill and minutes was tabled to the next meeting, as not enough members were present. Old Business:

Alta updated the board that Josh Wilson is booked for Spanks in the Park. Anna has also arranged for a stage and sound. She currently has the Kitchen Band, made up of local woman, and a magician. She is working on getting a few more acts for kids. Anna also informed the board that the event sponsors for 3 on 3 basketball, mud volleyball, and the 5K are returning again this.

Alta informed the board that they ordered 6 more of the snowflake Christmas decoration for the light poles, after trying out the snowflakes on the poles. There is money planned in the budget to order more next year, if the board decides to do so. Alta also mentioned they have to be mounted over the sidewalk, due to the size and structure of our light poles. If mounted on the inside, it would interfere with truck traffic.

Anna updated the board on the Miss Tuscola pageant. They had a great attendance turn out for the pageant. There door admission was up $700 from last year. Denise thinks this is due to having more little miss contestants this year. The little ones tend to bring more extended family and friends. Denise was very pleased to be able to make a large contribution to the scholarship fund this year. Anna said the past few years the pageant has been able to make a profit as well as contribute to the scholarship fund,

The official vote for the Kiwanis grants were tabled to the next meeting. Donna asked if these grant requested followed the grant guidelines. Alta and Anna both agreed that these requests were questionable. Alta suggested emailing the board members a copy of the guidelines and well as the tourism ordinance to the board members for review and discussion at our next meeting

Want to get notified whenever we write about City of Tuscola Tourism Committee ?

Sign-up Next time we write about City of Tuscola Tourism Committee, we'll email you a link to the story. You may edit your settings or unsubscribe at any time.