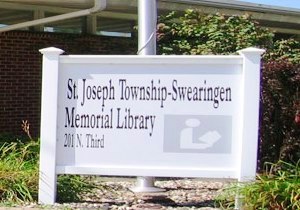 The Swearingen Memorial Library board of trustees gathered at 7 p.m. March 17 at the library in St. Joseph Township to approve reports and conduct new business at its regular meeting open to the public.

Opening with introductions for the benefit of audience and visitors, the trustees invited guests to bring up any issues they wished to discuss along with questions or comments. According to board procedure, each individual was permitted between two and five minutes at the discretion of the board president, with the total time for public comment not to exceed twenty minutes.

Committee presentations began with the budget and investment committee, which noted that a CD was due to mature on March 18 and discussed the budget for the 2017 fiscal year. Building and Grounds made a report, followed by Policy and Planning.

In old business, the board prepared to vote on vendor proposals for cleaning service. New business, including any items not previously entered on the agenda, was broached prior to adjournment.

Want to get notified whenever we write about St. Joseph Township-Swearingen Memorial Library ?

Sign-up Next time we write about St. Joseph Township-Swearingen Memorial Library, we'll email you a link to the story. You may edit your settings or unsubscribe at any time.